DRUGS, DESIRE & DISEASE – how neuroscience is changing our attitudes to addiction 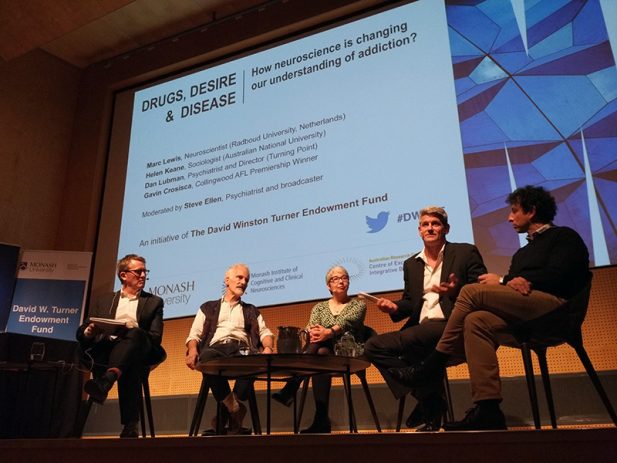 ‘Drugs, desire and disease: How neuroscience is changing our understanding of addiction’ was held at the National Gallery of Victoria on 21 October. The world-leading panellists included:

Psychiatrist and radio broadcaster with 3RRR and 774 ABC Melbourne Dr Steve Ellen moderated the discussion. Central to the debate was the question of whether addiction is a brain disease.

Professor Lewis wroteThe Biology of Desire in 2014, where he posits addiction as part of the brain’s normal functioning. He also wrote Memoirs of an Addicted Brain, where he recounts his progressive drug addiction over 15 years.

“I never thought I had a disease. I always knew I was doing bad things and hurting people,” Professor Lewis said.

Mr Crosisca, who is also former AFL player, drew on his work at Sober Living Housing.

“Anything that reduces stigma and increases people’s access to services should be encouraged,” Mr Crosisca said. “Who cares what we call it?”

Associate Professor Keane noted that addiction was conceived of as a disease in the 19th century with the rise of individualistic behaviours. She observed that the brain disease model of addiction can be stigmatising because it creates fear of the “different, abnormal or diseased” individual.

Professor Lubman, a professor in addiction studies with the School of Psychological Sciences, likened addiction to a ‘software problem’ in the brain.

An initial poll of the audience prior to the debate found a slight majority (57 per cent) held the belief that addiction was a disease. However, by the end of the discussion, a significant proportion of the audience had changed their view, with almost two-thirds thinking that such a view was false.

The evening was co-hosted by Professor Murat Yücel and Dr Adrian Carter, from the Monash Institute of Cognitive and Clinical Neurosciences, and was an initiative of the David Winston Turner Endowment Fund. The Fund is a $5.2 million philanthropic investment supporting research  into  obsessive-compulsive  disorder  and  addictions.

Professor  Yücel  holds the David Winston Turner Chair in Addiction and Mental Health within the School of Psychological Sciences. The event was supported by the ARC Centre of Excellence for Integrative Brain Function.