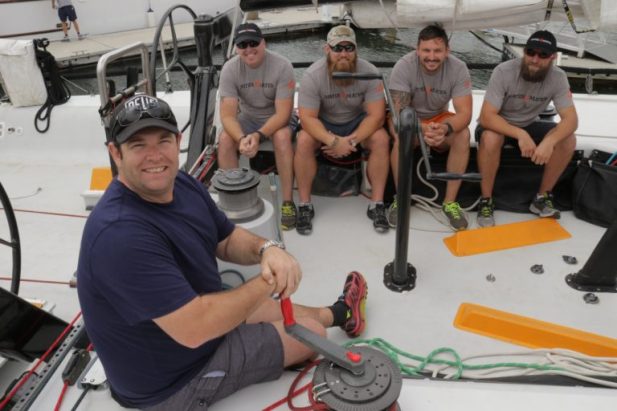 Man Up is a three-part ABC documentary exploring whether the stereotype of the emotionally-stunted, stoic Aussie man is contributing to our high rate of male suicide. It’s done from the perspective of a quintessential Aussie bloke – Gus Worland – one of three male co-hosts on the Grill Team, a Sydney morning radio show that’s more blokey than football, meat pies and Holdens.

The series begins by highlighting our problem with male suicide: it’s the most common cause of death for men under 45. Seventy five percent of all suicides are men; the rate is twice the road toll – yet as Worland repeatedly asks: “Why doesn’t everyone know about this?”

Worland quickly discovers that amongst the myriad of possible causes, one stands out: Australian men struggle to acknowledge and express their feelings and ask for help. A recent Australian study linked suicidal ideas to four key factors: depressed mood, a personal value system emphasising masculinity and stoicism, stressful life events and a tendency to withdraw and avoid problems.

My first impressions of the show were not good. It annoyed me: another celebrity telling the experts how to suck eggs. Did decades of research and clinical experience count for nothing? Could a radio broadcaster with a microphone walk into the room and tell everyone what they were doing wrong?

I’m a big fan of people who have actually experienced mental illness adding their voice and knowledge – but a guy from the Grill Team – surely not?

As it transpires, Worland is motivated by the loss of a close friend to suicide; a man who apparently had everything and never appeared anything but happy. And even more surprising, behind the scenes is some unique research backing up the premise of the show, and examining whether watching it can change male attitudes.

In the show, Worland chats with construction workers, soldiers, farmers, boardroom CEOs, schoolboys and more to explore their attitudes to emotional expression. Similar themes emerge in all the men: they struggle to express feelings, they believe it’s inappropriate. Yet when they do express emotions they find it cathartic, and they wish they could do it more.

Worland looks at programs like the Men’s Sheds and Mates4Mates and explores the work they do to support men suffering mental illnesses. He discovers a range of surprising and disturbing facts about suicide. For example men on a building site are six times more likely to die from suicide than a workplace accident, yet knowledge about workplace safety far outstrips knowledge about suicide and prevention strategies. He keeps coming back to his initial question: “Why don’t people know about this?”

There is a particularly poignant part, in episode two (which airs tonight), where he visits his son’s school to watch a seminar on emotions. The boys do a series of exercises to build their comfort around expressing feelings. It ends with some surprising revelations. I think even the hardest of men will shed a tear during this part. (I shed more than a few!)

In episode three, Worland applies his past experience as a salesman to explore how he might use advertising to spread the word about the benefits of expressing emotions. He enlists advertising gurus and develops a TV campaign. The final product is bold and powerful in its simplicity. Despite my initial cynicism, I couldn’t help being impressed.

Can a show change attitudes?

Professor Jane Purkis is a Melbourne University psychologist and epidemiologist who has been studying suicide for decades. Professor Purkis’ research group has completed a study of almost 14,000 Australian men (due for publication next year). It found one defining characteristic of masculinity, self-reliance, is a key predictor of suicidal thinking.

Male attitudes are only one part of the jigsaw of men’s suicide, but they seem to be a large and important part. Studies of whether changing attitudes will influence the suicide rate are essential.

The next phase of her group’s research is examining whether these attitudes can be changed. They’ve already finished a randomised control trial of Man Up by getting 167 men to watch the show (and 167 to watch an unrelated documentary) and measure their attitudes before, after and a month later.

One month after watching the show 84% of the men reported a change for the better, with 71% saying they’d feel more confident reaching out to someone. (The study’s results will be published soon.)

There are some flaws in Man Up. For starters, there are few female voices. The show is unashamedly male oriented – it’s about understanding why men suicide, from a mostly male perspective. At times it feels hollow. Given Worland presents the view that Australian men, as distinct from women, are emotionally barren, more opinion from those who do express emotions would have helped.

The show itself seems to teeter between celebrating male culture and asking it to change – it feels confusing in places. The darker side of male behaviour is left unexplored.

Men are far more violent than women – this contributes to the high suicide rate – most obviously because men choose more violent means (like firearms and hanging) to take their lives. This explains why more men die from suicide despite more women attempting suicide.

Similarly, the relationship between male bonding and alcohol is missing, yet alcohol and drug abuse are key mental illnesses for men. They contribute to suicide both as a cause of depression and despair and as a precipitant to the actual act of taking one’s life.

I am reminded however, that people like me (psychiatrists) are often criticised for boring everyone senseless with our endless inclusion of all the known facts to the point where the basic message is lost. Worland’s simplicity and direct approach might be just what’s needed to tackle the hidden epidemic of suicide lurking in our society.

Overall, Man Up is well worth watching. It’s both a TV show and an experiment – a description of the problem of male stoicism, and an attempt to change it. It is narrow in its focus, but it’s a true insiders view – Worland is about as Aussie as you can get and has a refreshing, honest and genuine approach.

Also, a team of scientists are sitting behind the scenes doing the research to see if this approach works. It’s nice to know that in world where opinion seems to trump evidence, there are still people who back up their ideas with science. I liked that it’s a curious mix of celebrity, culture and science.