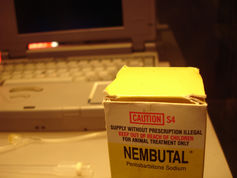 It is illegal in Australia to aid or abet suicide. Despite this Dr Rodney Syme publicly announced this week that in 2005 he provided a lethal drug, Nembutal, and advice to a patient who two weeks later used the drug to end his life. The police have re-opened the case, and will now decide whether his actions warrant criminal charges being laid.

Dr Syme is a well-known euthanasia spokesperson and advocate and the circumstances back in 2005 were well publicised. Dr Syme wrote a chapter in his book about the case. The patient was Steve Guest, a journalist, who was dying from oesophageal cancer and apparently near death and suffering considerably.

Dr Syme states in this article and in this interview that he gave the Nembutal and advice to Steve Guest to relieve his psychological and existential suffering.

This is an important distinction. He does not admit to aiding suicide, he admits to relieving suffering. He implies suffering was relieved by providing Steve Guest with control over how he died.

This is a common theme in end of life clinical situations. Patients sometimes fear the circumstances of death (such as pain and other physical symptoms) and fear they will not be helped enough. Having the means to end their life can provide a sense of control over that fear and uncertainty – regardless of whether they use it.

When the police investigated and interviewed Dr Syme at the time of Steve Guest’s death Dr Syme admitted to providing information and medication, but he declined to name the medication, and the police did not proceed with charges.

Nembutal is a barbiturate drug, often said to be the drug of choice for assisted suicide in terminal illness. It is very effective for ending life. It is illegal to import or possess Nembutal in Australia. It is licensed for use by veterinary surgeons on animals.

Certainly Dr Syme has taken a big risk. He says he considered this risk carefully and spoke to barristers before he made his admission. Dr Syme has said he did this to encourage our legal system to address the issue of assisted suicide. He hopes it will result in a legal precedent being established to allow assisted suicide for terminally ill patients.

Interestingly, in the Netherlands where euthanasia is legal, the legal process began many years ago with a similar case involving assisted suicide by a doctor.

Let me remind you of a few important definitions – euthanasia is ending someone’s life for reasons of mercy – so-called mercy killing. Assisted suicide is helping a person to end their own life.

Euthanasia is legal in only three or four countries in the world; assisted suicide is legal in about a dozen. In pretty much every country a range of circumstances must be met – in essence the person must be of sound mind, be free of mental illness, have a terminal illness and be suffering.

In Australia, there have been approximately 16 private members bills before parliament in the past two decades addressing euthanasia or assisted suicide, but despite this, both remain illegal.

Opinion polls support allowing patients the right to end their own life when terminally ill with un-relievable suffering.

So we have a difficult situation. The public and politicians seem to disagree. You can speculate on the reasons for this – it’s complex. The arguments for and against euthanasia have been well-addressed thousands of times. I don’t need to go into detail here – but they include issues of the sanctity of life, the role of doctors (is ending life a legitimate role for doctors?), the slippery slope (euthanasia could be extended to other forms of state-sanctioned killing), the right to control your own destiny and more.

Dr Syme has bought into sharp relief one major issue – some doctors believe the laws are wrong, and they act according to their beliefs. Note, I am not suggesting Dr Syme has broken any laws – that is an issue for legal minds.

Personally, in this situation I am conflicted. I know there is a very long history of bad laws being changed by various forms of civil disobedience. This includes changing laws by breaking laws. But I also know that doctors who act outside the law and outside accepted practice often get it wrong. Medical history has too many examples of large scale errors, and even abuses. Personally, I feel far more comfortable debating laws and accepting the result, than challenging laws through disobedience.

But I do believe the laws need changing, and I do wholeheartedly support a public debate. The issue is a tough one, but the stakes are high.

Despite amazing advances in palliative care, some people still suffer significantly at the end of their life. They ask to have their death hastened but the outcome is inconsistent and legally confusing. Many doctors end up giving extra morphine or equivalents, knowing it may hasten death, but apparently with the intention of relieving suffering.

This is a vulnerable group of patients with no political voice, and in a country with our medical and political resources, more should be done. The confusion should be resolved.

Ask yourself: do you support the right of a person with a terminal illness to die in a way and at a time that they choose? Would you go so far as to assist them? Would you actively end a person’s life yourself (perform euthanasia)?

My own views have changed over time. I do support assisted suicide for terminally ill people who are suffering and competent to make the decision. I do not support euthanasia because I do not think one person should directly take the life of another – even if their intentions are noble.

The decision to die is personal, and in my opinion only the person suffering should be allowed to take the required action. Also, I believe you are placing an unreasonable burden on someone if you ask them to end your life.

Finally, I admire Dr Syme’s courage and his conviction – but I think he erred in his decision to give Steve Guest Nembutal. Whilst it is yet to be decided whether he has aided or abetted suicide, at the very minimum he stepped outside accepted practice and provided a drug that is banned in this circumstance. I don’t think he had the right to make that decision – despite his obvious good intentions and the apparent relief it brought Steve Guest who was clearly suffering.

Never-the-less, I hope he is successful in encouraging our lawmakers to address this critical issue.

What do you think?

Acknowledgement: Bill O’Shea contributed to the preparation of this column.

This article first appeared in The Conversation http://theconversation.com/aiding-and-abetting-suicide-in-terminal-illness-26095